Home/News/February 2015: Presentation Vis-Co® D3 die at the open house in Japan
Previous Next 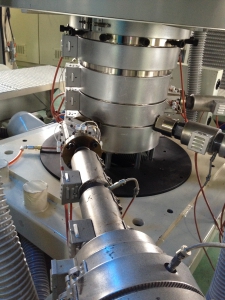 In-house exhibition of the company Hokushin in cooperation with Shonan Trading Company near Tokyo City for the first time the new die–Vis Co® D3 was presented.

In Japan, about 70 film producers are established and reputable manufacturers were guests at house exhibition. The new die of U.B.Tech.GmbH was adopted with a lot of astonishment. So the big differences with the conventional die include; energy saving, the small size and weight.

Most importantly the differences in the process, because of the specially developed melt distribution results in very short melting paths and residence times.
In this regard, the change-over the standard blow head are reduced by more than 50%. It has fewer gel’s and burns.

The differences you can notice in the table below.

All around a new economic development with the Vis–Co® D3!

About the Author: claudia